The Bennett Brook Railway channel of railway archive films on YouTube shows Training films on everyday tasks such as track maintenance in the age of steam, including these great 1950s track gang.

To me they look just like the Airfix track workers still available from Dapol. It’s all the everyday detail that make such films fascinating.

Blog posted by Mark Man of TIN on Sidetracked, 28 December 2020.

The Last Train from Southwold 1929

I like the corner compactness of this layout, gaming as I often do tucked away onto a corner table. Another vanished Short Line, this time in Stiperstones, Shropshire.

Blogposted by Mark Man of TIN on his occasional Sidetracked blog, December 2020

Whilst I was cutting out more of the civilians from Peter Dennis’ Little Wars PaperBoys book, I thought that these figures not only look good on a toy theatre stage but they look very much like railway civilians with their bags and baggage.

With all the head and arm variants, these are highly versatile Victorian, Edwardian and early 20th Century 54mm paper card figures.

Tucked away on the platform is one of my paper suffragettes (made using one of Peter Dennis’ figure outlines for scale).

Keen eyed ‘Little Wars’ / ‘Floor Games’ fans will spot an advert for Jabz Hair Colour (as handwritten in Floor Games by Wells or G.P.W. one of his two sons).

I presume they are meant by Peter Dennis to be evacuees for the War of the Worlds element of the Little Wars PaperBoys volume of H.G. Wells, as well as civilians for Wells’ Little Wars.

The station is plastic OOHO Hornby platform, Lemax Christmas Village lantern, whilst the Halt building is our family’s old wooden farm buildings from the 1960s.

You may have seen a similar platform set up with 54mm hollowcast and new metal figures on my LWR Little Wars Railway blog post here on my Sidetracked blog in May 2020:

The train set and track is from a toy plastic battery operated Wilko Western Express bought in 2018.

Blogposted on Sidetracked by Mark Man of TIN, 21 December 2020.

A Rail Car or Rail Bus – the British version of the Galloping Goose and Jitney in America, like the Bowdon Railway in Georgia. 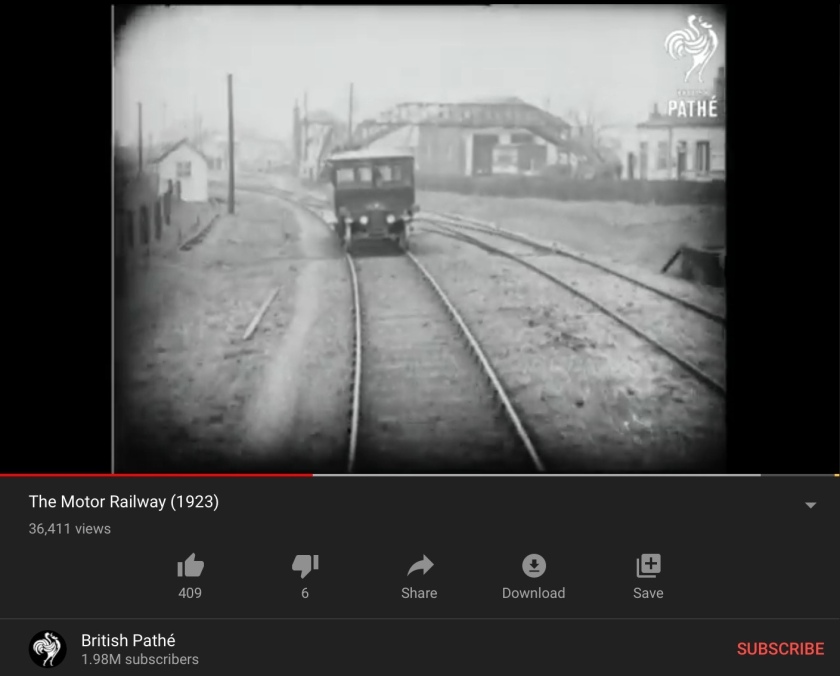 A one passenger carriage and mixed freight service – a British Mixed Train Daily?

Short Trip is a delightful interactive illustrated railway journey with sound, like a digital Myriorama endless landscape, by Australian based illustrator Alexander Perrin.

As quirky as the photos and short lines of the USA of my favourite railway book Mixed Train Daily, Short Trip was inspired by a real railway in Japan called the Hakone Tozan Railway https://www.hakone-tozan.co.jp/en/.

This was recently damaged in a typhoon and has now reopened – there is a charming little YouTube video about it here featuring a small Japanese boy and his toy train https://m.youtube.com/watch?v=Nd_2-tNqWSw&feature=youtu.be

This Short Trip website was a tip off by Alan Gruber of The Duchy Of Tradgardland blog who is working on his own Garden Railway plans. Thanks Alan! Another wet morning happily sidetracked …

This is delightful – you drive or travel at your own speed, listen to the bird song, the train sounds and trolley bell at each station stop.

You can go forward or backward, right or left at your own speed.

Go slowly and look at the all fine detail of hand drawn buildings, bridges, stations and landscapes. There are moving parts ranging from tiny humanoid animal passengers, turning waterwheels and windmills to rippling water.

You can read more about its creation and creator here

“It’s a magical, rickety switchback railway that ascends a forest shrouded mountain all throughout the year,” Perrin told Colossal.

“There’s something about the beautifully crafted forms of the railway in sculpted union with the cliff faces and trees that just hits such a therapeutic, aesthetic sweet spot. It’s a little bit like riding an enlarged miniature railway, if you know what I mean. You remain passive and enjoy the ride for the sake of the journey.”

Source quote: This is Colossal.com

If you are too flibbertigibbet to finish your own railway project or it’s too wet a day for a garden railway, this is just the calm thing for you.

I’m sure Heath Robinson and Rowland Emmett would approve.

There is a donate page on the simple menu linked to PayPal if you want to reward Alexander Perrin for the fun you have had with his creation.

1953 Mixed Train Daily – one of my favourite railway books

One of the things I like about the Internet age is how you can drop in on small communities for a short while.

I often do this whilst browsing the Forgotten Georgia blogpost and its Facebook page.

Reading Mixed Train Daily, I come across little historical nuggets of rural and wild-west America or Americana that have survived into the late 1940s and early 1950s.

The Bowdon Railroad of west Georgia is one such curiousity. Bowdon Railroad used to link up with one of the Georgia main lines at Bowdon Junction, providing the rail link to the City of Bowdon (“The Friendly City”) located in Carroll County, Georgia.

Bowdon now has a population of about 2,000, twice what it had in the railroad days of the 1940s and 50s This is more like the population numbers of a small town or larger village in the United Kingdom and quite different from the average city in the United Kingdom with its requirement to have a Cathedral, despite the occasional granting of recent smaller Millennium UK cities. 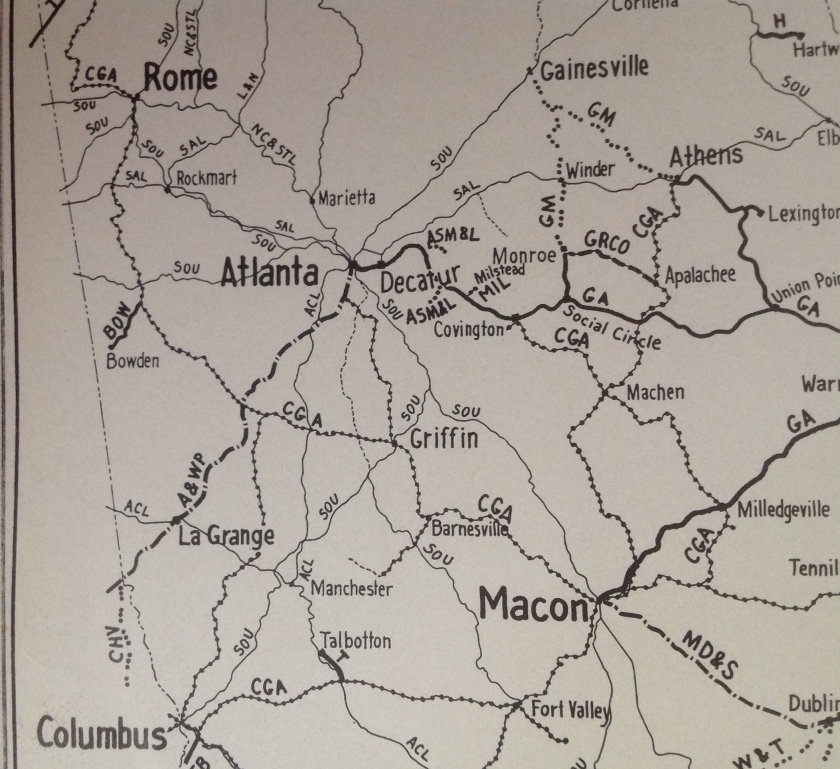 Through the wonders of the Interweb you can drop in on Bowdon as a community today through its website – see http://www.bowdon.net

You can see on the photo gallery who has received Business of the Month this time.

You can even see the Founder’s Day Parade video on YouTube, as if you’re standing by the side of the road and wandering around. https://youtu.be/IB1W2_LY7Tg A couple of screenshots of this Littleworth Peterborough area light railway which looks WW1 vintage. The driver wears what looks like Army Surplus battle dress. 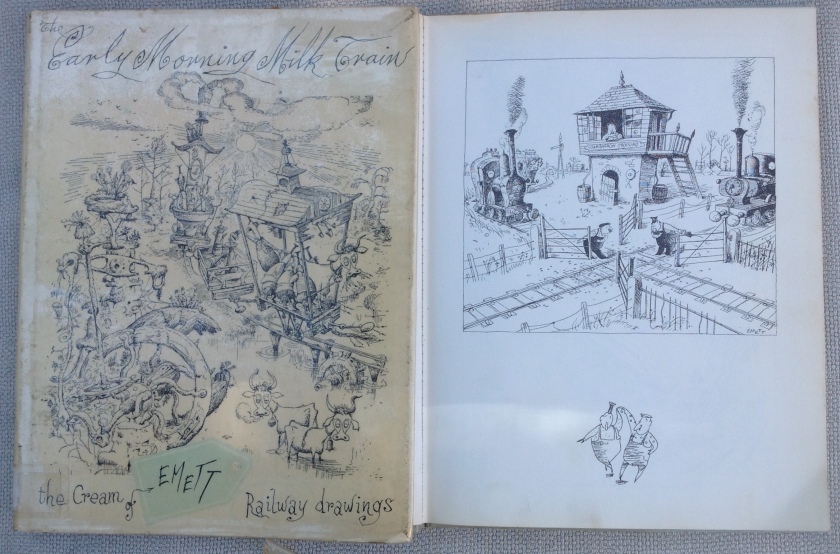 There is a large amount of film material of Emett’s machines out there on newsreel and YouTube cartoonist at home 1963 https://youtu.be/vKOeP42Z2nA

Silent black and white footage of the Festival of Britain Railway

And its website with links to the Rowland Emett Society

Having seen some interesting Pathe footage about the one man operation that was Port Victoria railway in the 1930s and 1940s, Alan Tradgardmastre Gruber as part of his 16mm (1/19 scale) garden railway plans asked on his blog about railway memoirs and manuals that give a ‘squad level’ picture about how a branch line runs, especially in the inter war years.

We chatted in the comments and email about inspiring films – Oh Mr Porter!, The Ghost Train, The Titfield Thunderbolt, The Railway Children – as well as various railway sitcoms such as Oh Doctor Beeching!

Lots of inserting wartime railway cartoons in this Emett compilation. Emett famously designed the Far Tottering and Oyster Creek Branch Railway for the 1951 Festival of Britain.

Several other books that I find interesting are railway historian Jack Simmons’ The Victorian Railway (Thames and Hudson) and Full Steam Ahead by the BBC team that did Victorian Farm, Edwardian Farm and Wartime Farm. The series is out on DVD and a few clips can be seen here: https://www.bbc.co.uk/programmes/b07lpglf 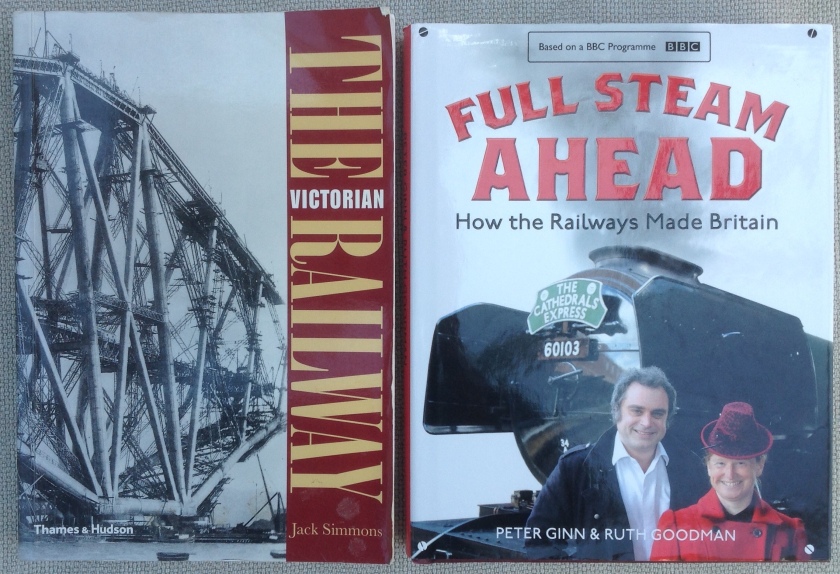 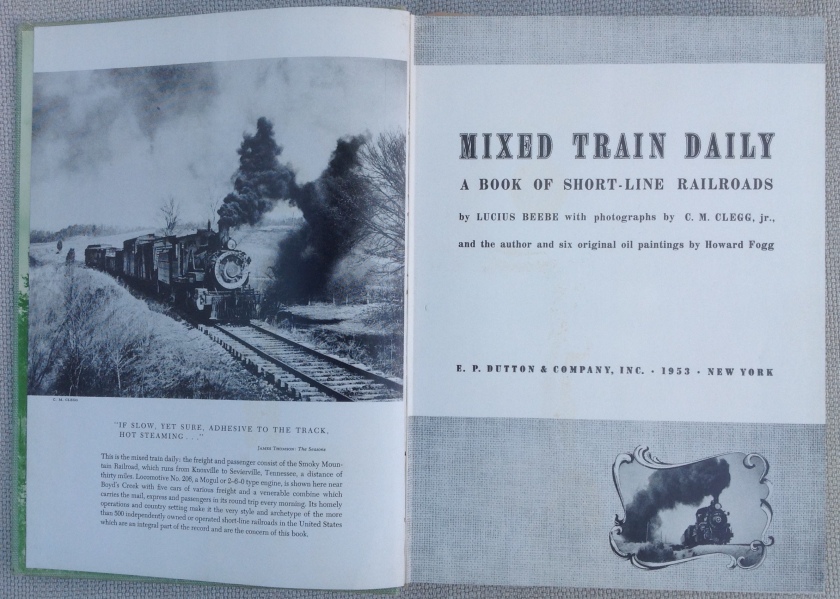 Mixed Train Daily by Lucius Beebe and photographer C.M. Clegg is probably my favourite railway book, published in America in 1953. It is based on the vanishing Short Line Railroads of mixed freight and passenger trains that connected the rural communities, industries, small towns and workplaces of America. Many were vanishing as Clegg and Beebe hurried to ride and photograph them before they were broken up. This was much the same process as happened in Britain during the infamous Beeching era. In many parts of America, cars and freeways, airplanes and freight lorries replaced railways.

This poignant and celebratory book is worth a future blog post by itself and worth buying just for the quirky names of the railroads and the photographs.

I was pleased to find that some of the Railways photographed in the 1940s and 1950s have survived as the American Short Line and Regional Railroad Association (ASLRRA). You can look up different railroads by state, town or destination here with links to each company’s website: https://www.aslrra.org/RR_Member_Search_NM.aspx?hkey=9450250f-beac-4459-ae9c-9ed5a13a9101

The original Thomas books that circulated in my family were interesting enough scenes (colour illustrations!) and at some point I acquired Rev. Awdrys poster map of Sodor. I found Sodor fascinating, slotted in the sea between Furness in Cumbria with the Isle of Man where my late Dad had taken part in the cycle TTs in the late 1950s. Another ImagiNation. I like the theme or hashtag here on this short lived 2008 blog of Topographic Tuesday, an occasional chance to share ImagiNations maps or landscapes https://pithhelmet.wordpress.com/2008/01/22/topographic-tuesday-the-island-of-sodor/

Lastly BBC I-Player have a small Steam Collection of BBC Archive programmes including this one by John Betjeman https://www.bbc.co.uk/iplayer/episode/b03495yn/lets-imagine-a-branch-line-railway-with-john-betjeman