Wilko is not quite a pound store but does have similar inexpensive plastic toys.

This lovely battery operated, digital sound and headlight American Wild West express train, carriages and oval of track was only £10 plus 2 AA batteries.

In the shop it looked to be roughly suitable for 40 to 54mm figures and products.

A similar proper product from a proper garden railway shop would obviously be much much more expensive. 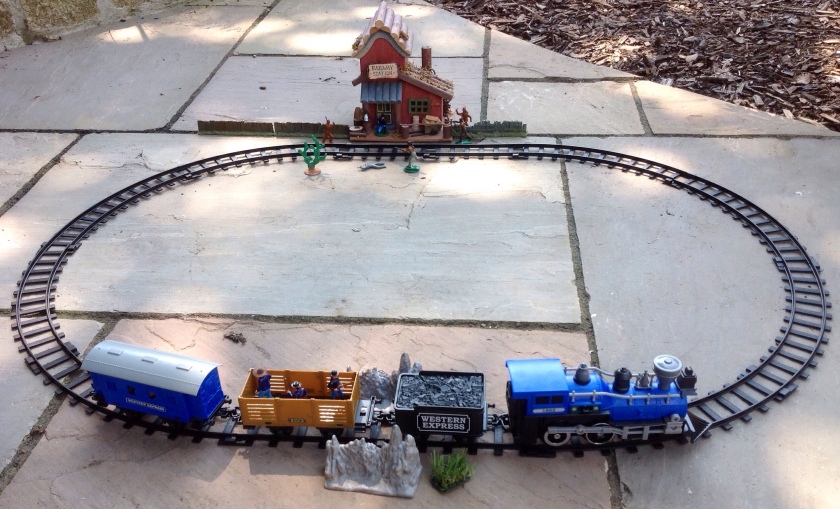 It was all very quickly assembled out in the rocky desert wastes of the Wild West (my garden). I brought out some Prince August 40mm homecast Cowboys and Indians and Taylor and Barrett hollowcast smaller size Indians.

Last year’s bird box to Western Railroad Depot conversion, along with some pound store plastic soldier rocks and cactus, all helped to quickly set the scene.

The Scene-ario: The isolated Railroad Depot has been attacked by hostile angry Indians, the station staff, a mechanic (usually repairing toy cars) is down.

The train would lend itself to many Victorian and Early 20th Century settings and Imagi-Nations from the American Civil War onwards to Boer War armoured trains and beyond.

I love the seductive writing or write up on toy packaging. I was always too easily impressed by this when younger and sometimes very disappointed by what was inside. Weren’t we all? I imagine it is even worse now in the days of online and TV advertising for toys.

The Wilco Railway Western Express is excitingly introduced as:

“The engine chugs and the whistle blows, taking you back to the grand age of steam! Haul the carriages along the track, imagine that you’re stood on the footplate and you’ve got to get the next station by nightfall.” 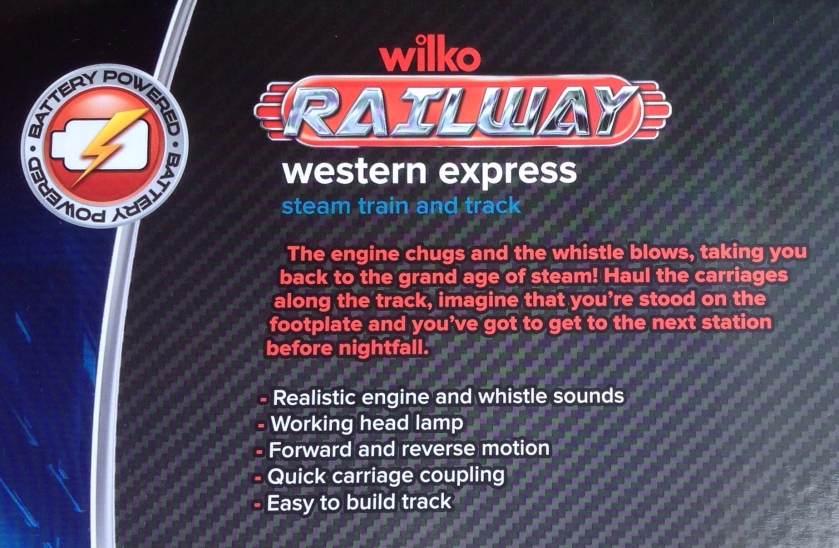 A cynic or the unimaginative adult might suggest that it would be hard to imagine the perils and drama of “having to get to the next station before nightfall …” as there is no station provided and the track supplied is rather short and circular.

However the realistic engine sounds and whistles are suitably atmospheric.

Imagine? A companion pack of plastic Cowboys and Indian or passengers, a few cows or buffalo and a few cacti would have been a great and inexpensive addition to the imaginative play possibilities of this set. There would follow hold ups, rescues, bandits …

This would add what was wisely known in my family as “Play Value” – if it didn’t have a suitable amount of this, you didn’t get it.

Where have all the cowboys gone?

Wilko used to sell Cowboys and Indians – and maybe still do in bigger city stores?

Wilco used to sell such handy 54mm Western figures in £1 tubes a couple of years ago, but I haven’t seen them recently. Tobar / Hawkins Bazaar had some slightly brittle hard plastic Airfix clone versions a year or two back – again I bought some as they were being reduced in 2016. Thankfully similar party favour Cowboy and Indians are still available online, as are rerelease of the pricey Britain’s Deetail metal based Cowboy, Cavalry and Indian figures if you can find a toy shop or an online stockist.

I was quite keen to see how this train would look with 54mm / 1:32 type toy soldier size Cowboys and Indians. I could have used my growing number of repaired and repainted Broken Britain’s Hollowcast lead Indians, but another day perhaps.

In keeping with the reposting on my Pound Store Plastic Warriors blog, I dug out some gaudily painted, gloss varnished Pound Store Cowboys and Indians (Airfix pirated / Hong Kong clone). I painted these way back in the mid 1990s. There’s even a black cowboy in this photograph below – I am amazed how historically accurate and PC I was, although fighting with toy Indians and calling them Indians would be deemed highly unPC by some. These are firmly Hollywood movie / Wild West Show toy soldier inspired Cowboys and Indians.

Out on the blazing sands, sorry rocks, the Wilco Wild Western Express runs into an Ambush and has its two valuable cargo wagons uncoupled and left behind.

Two cowboys guard the stricken carriages – until reinforcements arrive? But are they really the good guys?

Overall the 50 to 54mm cowboys and Indians are a little overscale, the train suits 40mm to 42mm figures better.

The engine to tender coupling needed a little extra help, so I rigged up a simple wire hook / link. All cheap plastic trains have little heft or weight in the rolling stock, so I lifted off the roof of the caboose carriage and the coal in the tender and added some spare old 2p coins as ready ballast (using the pre 1992 non magnetic kind, not so useful for basing figures).

The train needs a suitable paint scheme, such as a red painted caboose and paint work on the engine. This is likely to be Gloss paint rather than realistic Matt and weathering. I want to keep the Western style font stickers and make the whole Toy Soldier shiny, as if it is an old toy tinplate train, rather than a cheap plastic one.

As ever there is never enough track, especially straight track, so the only way to easily get more track is to buy another set. You get more wagons that way too. Yet four short pieces of track rarely justify that expense, even of £10. However it may be possible to make a silicon mould of one piece of straight track and cast it in Fimo or metal to make more.

Oh, and a working headlight! 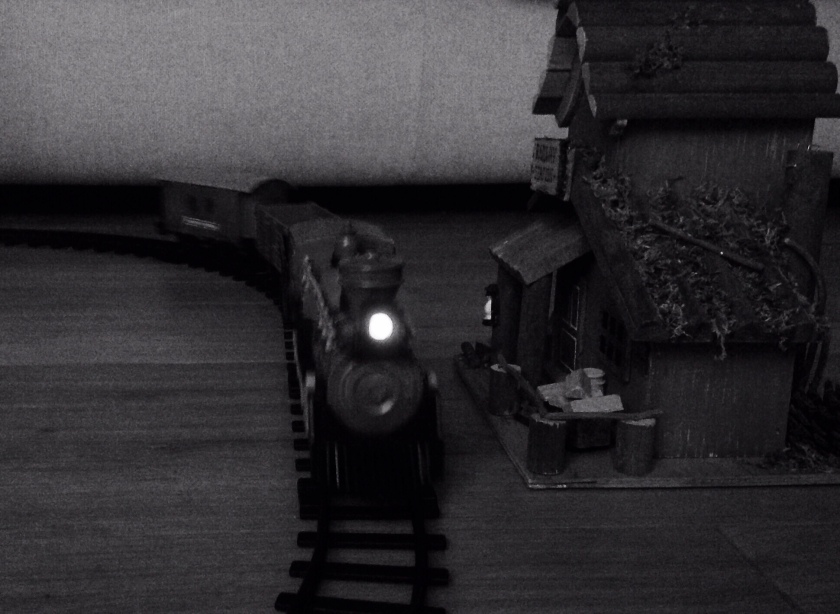 Hello I'm Mark Mr MIN, Man of TIN. Based in S.W. Britain, I'm a lifelong collector of "tiny men" and old toy soldiers, whether tin, lead or childhood vintage 1960s and 1970s plastic figures. I randomly collect all scales and periods and "imagi-nations" as well as lead civilians, farm and zoo animals. I enjoy the paint possibilities of cheap poundstore plastic figures as much as the patina of vintage metal figures. Befuddled by the maths of complex boardgames and wargames, I prefer the small scale skirmish simplicity of very early Donald Featherstone rules. To relax, I usually play solo games, often using hex boards. Gaming takes second place to making or convert my own gaming figures from polymer clay (Fimo), home-cast metal figures of many scales or plastic paint conversions. I also collect and game with vintage Peter Laing 15mm metal figures, wishing like many others that I had bought more in the 1980s ... View all posts by 26soldiersoftin