Some of you may remember reading my January 2018 about this simple comic ‘Burlesque’ military postcard from 1911, following up the identity of the writer Annie Harrop and its intended recipient,  her 20 year old brother Willie Harrop of Crewe:

Railway employee William Harrop (b. Crewe 1891) went on to serve in and survive WW1.

His unusual  service in WW1 was partly due to his special trade as a Locomotive Engine Fitter for The LNWR .

The Harrops were a railway family in the railway town of Crewe, his Crewe born-and-bred father Thomas being a Locomotive Engine Painter, also for the LNWR. Eventually several more sons, Walter Baden Harrop (Baden Powell or BP being a Boer War name?) and Lewis Harrop became LNWR apprentices.

Over a year after the blogpost

A few weeks ago Kathryn Harrop / Morris contacted me about this postcard and the associated family history research behind this story. She has been researching the Harrop side of her family, so could confirm some of my research ideas.

Kathryn said: “This story is about my great uncle and yes Annie [Harrop] did marry John Prince. Thank you for the info, it will really help me find out more about my Dad’s side of the Harrop family.”

Kathryn’s research confirms that Postcard writer Annie married John Prince in 1921 and she died in Crewe aged 87 in 1980.

It seemed to me a suitable home for Annie’s postcard to her brother Willie was back with the Harrop family.  They may no longer live in Crewe but it has given me great satisfaction to post it back to the Harrop family 108 years later!

It reminded me a little of this unusual postcard project Postcards from Time by Ben Curran http://www.postcardsfromtime.org/index.html

“You are a Territorial Terror”

This lovely little Burlesque series coloured postcard from 1911 (how that Burlesque word has changed over the years) showing a stage or music hall version of a Territorial in his scarlet coat, swagger stick (and stuck from a nearby hedge it looks) and skew whiff Home Service helmet.

A cheeky chappie who looks like he enlisted in a Light Operetta Company of the Territorial Army.

Tucked away in his jacket is what could be a hidden bottle? Hence the skew whiff helmet?

It captures the British public’s ambivalent attitude to licentious soldiery, the allure of a Redcoat to the giddy local womenfolk from Jane Austen’s Regency period onwards, the perils of a standing army bored and billeted on the civilian population and its slightly derisive approach to “weekend soldiers” three years before WW1. All in one single comic postcard.

The Territorial Force was formed in 1908, so the 1911 postcard was quite topical.

Marvin over at the Suburban Militarism blog has been focussing his research and excellent painting skills on the Territorial Force predecessors, the British Volunteer Regiments of the 19th and 20th Century. https://suburbanmilitarism.wordpress.com

What is even more interesting is the back of the German printed postcard of Watkins and Kracke Ltd. (Don’t read too much into this as subtle German propaganda – many British postcards were printed in Germany). 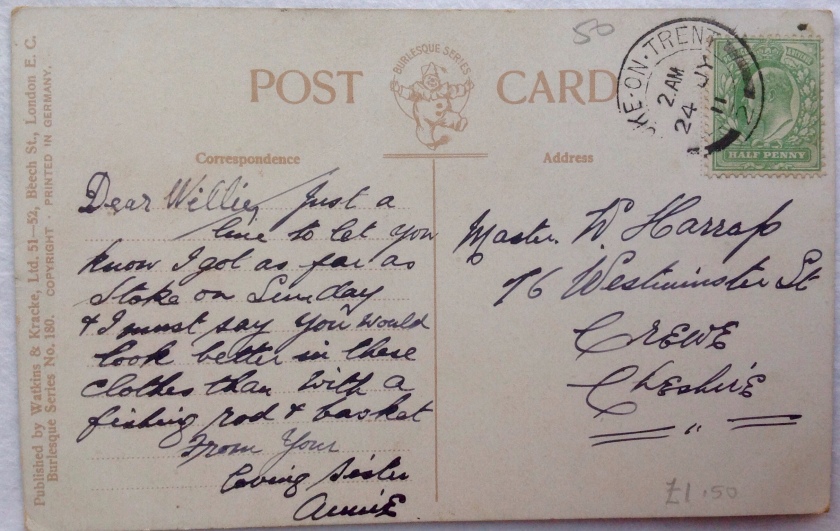 Just a line to let you know I got as far as Stoke on Sunday and I must say you would look better in these clothes than with a fishing rod and basket.

From your loving sister Annie

I thought 1911 being a Census Year, that there may be a chance with the names and addresses on the postcard of finding out more about Annie and her Brother Willie.

I searched the 1911 census for this Crewe address and found the family of William Charles Harrop and his sister Annie. William was serving an interesting apprenticeship, when not out with his fishing rod.

This was partly due to his special trade as a Locomotive Engine Fitter for The LNWR . The Harrops were a railway family in the railway town of Crewe, his Crewe born-and-bred father Thomas being a Locomotive Engine Painter, also for the LNWR. Eventually several more sons, Walter Baden Harrop (Baden Powell or BP being a Boer War name?) and Lewis Harrop became LNWR apprentices.

It is clear from his Attestation papers that William had not served as a Territorial, so the postcard choice was no in-joke from his sister that Willie was one such “Territorial Terror”. 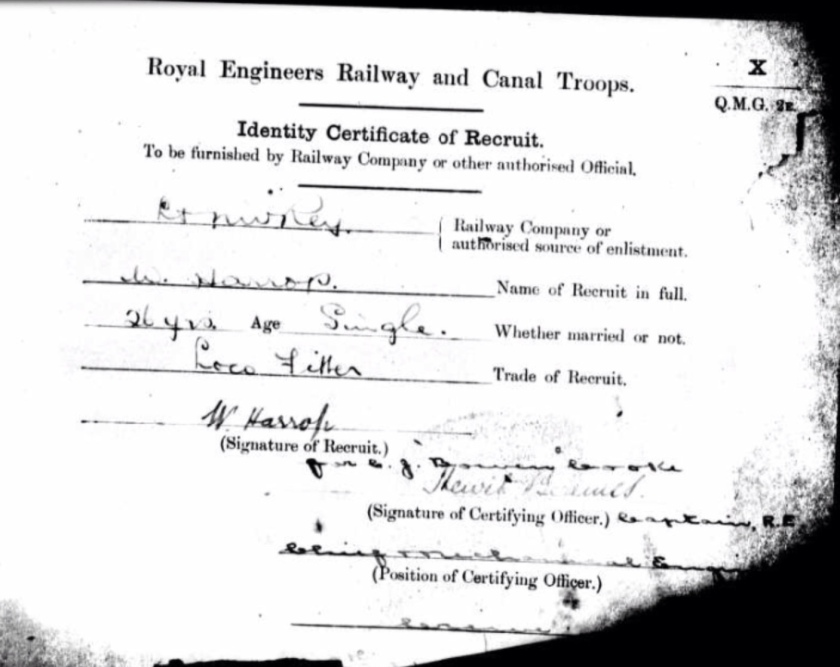 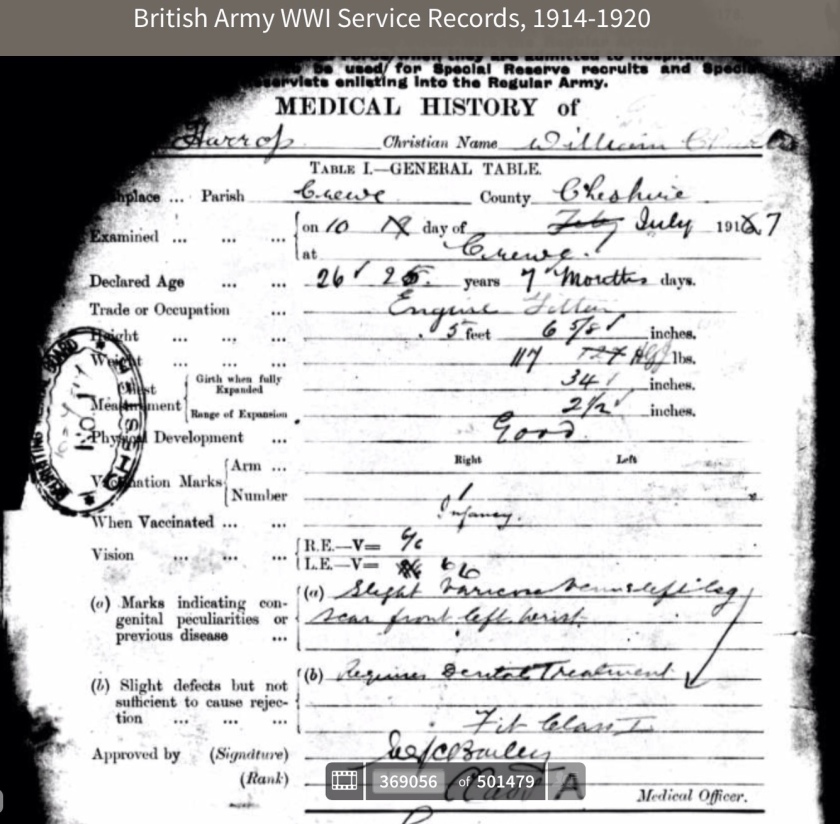 Interesting unit to work on as a Sapper (equivalent to Private) in the Royal Engineers Railway and Canal Troops Department. It also identifies his employment as Loco Fitter, his previous employer as the LNWR (London & North Western Railway) in his lifelong railway town of Crewe. It seems there was a strong link between the LNWR and the Railway Operating Division.

Longmoor was the Royal Engineers training camp and base in Hampshire for these Railway units with a Railway Signalling School etc.

The first of the railway operating companies were raised in April of 1915 and deployed to France in June of that year. They performed three basic functions:

1. The management of traffic.

2. The provision of crews for locomotives.

3. The repair of rolling stock and other items needed to keep a railway in operation. This is where William Harrop as a Loco Fitter would have worked.

The operation of light railways was the responsibility of the light railway companies. This is the type of 26 LRW Company that William served with.

A good description of the genesis of railway units in the BEF can be found in the History of the Corps of Royal Engineers, Volume V, The Home Front, France, Flanders and Italy in the First World War, (Chatham: The Institution of Royal Engineers, 1952), pp. 594-595. http://1914-1918.invisionzone.com/forums/topic/83960-railway-operating-divisions-royal-engineers/

It has been suggested on the 1914-18 Invision Zone webpage on ROD units by some that W.R. on his regimental or service number is Waterways and Railways (rather than War Reserve?)

His service in the 26 LWR CO is the Light Railway Workshop Company, based at Longmoor. This unit embarked for France and Flanders 12 March 1917. The RE Museum website of War Diaries lists dates for this Company as March 1917 to August 1917, although William’s faded service records suggest that he transferred to the 18th ROC RE on 8 June 1918 . 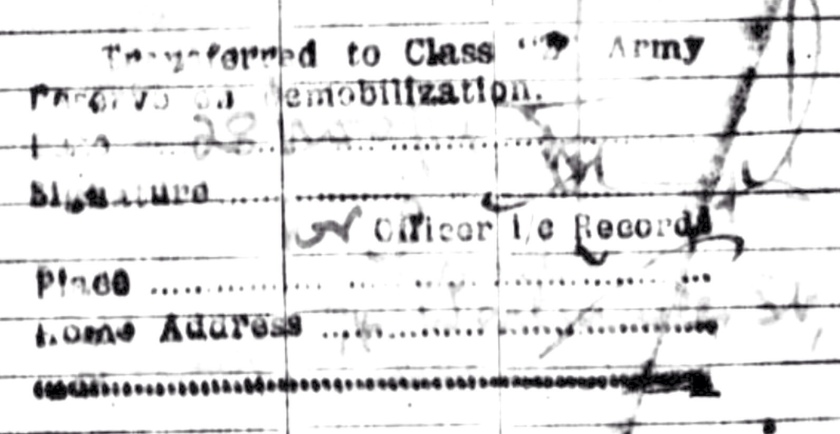 William survived the war and received the standard two war service medals, the British War Medal and Victory Medal for his service with 118th Railway Company, Royal Engineers (formed 13 November 1915) and at first with the 26th LRW Co Royal Engineers.

After the war he returned to and remained in Crewe in railway service. He was listed as a locomotive stores issuer (from 1927) in the 1939 Register, living in 58 Meredith Street, Crewe with his wife Emily L. Harrop (nee Judson, b. 1899). They had married four years before.

Hopefully he still had a relaxing time with his fishing rod and basket up until his death aged 75 in 1966.

What became of his ‘loving sister Annie’ during and after WW1 is harder to trace but she may have married a John J. Prince in 1921.